ANNOUNCEMENTS (UPDATED 6:24pm YESTERDAY)
TRENDFLOW NOW BACK AND BETTER, MAKE SURE YOU DOWNLOAD OUR APP FOR ACCESS EVEN WHEN THE NETWORK IS BAD

IMPORTANT!!! YOUR REWARD FOR READING NEWS IS ONLY VALID WHEN YOU COMMENT (YOU EARN 8 TOKENS FOR READING AND COMMENTING)

PLEASE TAKE NOTE, WITHDRAWALS ARE NOW PAID ON THE 10TH, 20TH AND 30TH OF EVERY MONTH FOR PAYMENT ASSURANCE 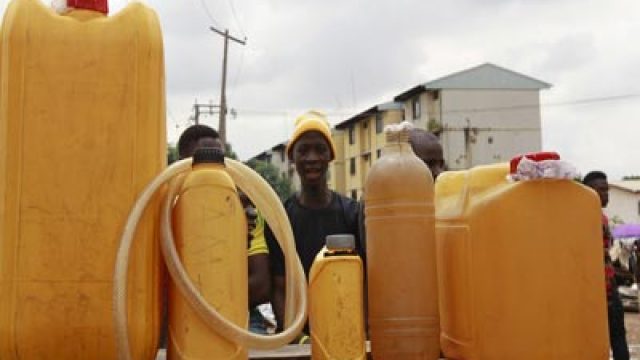 ASP Mohammed Jalige, Police Public Relations Officer (PPRO), in a statement said on the 19th April 2022 at about 1000hrs, the command received a complaint through the Area Commander, Jere Area Office that the complainant, one Bakura Bukar ‘M’ of Mararaban Jos, Kaduna, on the 16th April 2022 entrusted his truck with Reg.No BAM 02 XA loaded with 40,000 litres of PMS valued at N6.208 million to his driver for onward delivery from Lagos to Kaduna.

According to him on the 18th April 2022 at about 2300hrs at Issah U-turn along Abuja-Kaduna road, the driver had a flat tyre and had to pull off the road in order to replace the deflated tyre.

He said three unknown persons came in a sedan car and attacked him and his motor boy, adding that they took and tied them in a nearby bush.

He said with the strength of the report, the Commissioner of Police Kaduna Command ordered a full-scale investigation into the matter as detectives were immediately detailed and swung into action with a view to apprehending the culprits.

He said the team acted on intelligence and succeeded in arresting three suspects; Habibu Mohammed, Halilu Mohammed and Isa Mohammed in connection with the offences.

He mentioned their names as; Isa Yusuf, Sutajo Lawal and Stephen Habila.

He said the operatives pushed the process of investigation further and also recovered the operational vehicle of the criminals, one jackknife and the stolen fuel truck as well as the PMS.

Meanwhile, the suspects have since confessed to having been a syndicate who are notorious for such acts and are currently assisting the process of investigation.

He said they will all be charged to court on completion of the same. However, a deliberate effort by the Command is geared towards apprehending all the remaining syndicate members as well as their collaborators if any in order to prevent future occurrence

The Commissioner of Police CP Yekini A. Ayoku, therefore, called on the Petroleum Tanker Drivers Association (PTD) to take advantage of the command’s designated emergency contacts to report any breakdown of tanker along the road so that a nearby Police formation will be contacted for security coverage through the period of repair.

Looking for something? Search below